Tom lives in a sparsely populated rural area. Due to his remote location, he struggles to access digital healthcare. He knows these services would be particularly beneficial to those in his community. But he feels nobody is listening. How can he (and we) influence the decision-makers to improve the system when it’s just not working for us? 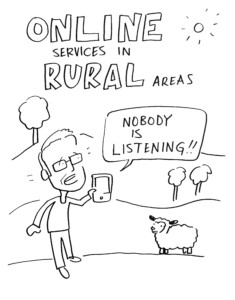 The group discussed campaigning, or taking agitative measures to get attention.

All agreed it is indicative of a wider problem of services being overburdened in certain areas, and there being a lack of courage or vision to rectify the problem and funnel money to where it is needed.

For example, when making a GP appointment, there is no mechanism to say ‘don’t come in’ if your ailment is not severe enough for GP attention – and yet we know that there are millions of unnecessary GP appointments made every year.

Again, it comes back to fear of taking that risk. What if that ailment turned out to be serious? What would be the consequences for the service who had made that decision?

We also recognised that public expectations of NHS services can be high for the money we pay. “We’re paying Ryanair fares and expecting to fly first class.”

Andrew suggested that the system is, in fact, listening. It’s just that nobody can do anything to solve the problem.

Tom posed the question: “Then how can we get the debate to the right level, and convince the right people that if you make these changes it will make you more efficient in the long-run, and it will actually save you money?” 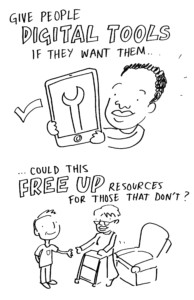 One thought on “How do service-users influence the system when the system is not listening?”