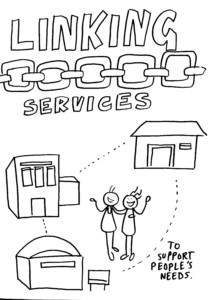 This was to a large extent a discovery conversation – swapping notes on local food growing projects and networks, talking about Social Prescribing – for staff working for two new services. These were a residential home for people with complex needs and a multi-disciplinary outreach team for Modality, a company which has recently taken over the running of four GP Practices.

Kath described the facilities at St. Andrew’s Court and gave the example of an elderly man with dementia who was incontinent, needed 3 people to bathe him, was anxious and who had been sleeping in a chair rather than a bed for many months. He is now much less anxious, sleeps in his bed, and often needs fewer people to help bathe him. This level of care is expensive. The group discussed the fact that it is possible to have “all the bells and whistles” in terms of buildings and equipment, but doing activities and making sure that people are looked after and stimulated doesn’t always happen because of staff shortages and attitudes of staff. Members of the group involved in Social Prescribing talked about the practicalities of St. Andrew’s Court, for example transport, whether the home can take direct referrals or referrals through social services, how easy it has been to recruit staff.

The philosophy of the home was that workers were in the residents’ home, rather than residents being in the workers workplace. Activities, timetables and everything other than medication schedules are built around the residents. If they want a lie-in, they have one. Activities need to be useful, entertaining and meaningful, including baking, a sensory herb garden, plans for raised beds in the garden providing vegetables for meals, a probable cat, visits from dogs and a possible llama!