I was Head of Applied Leadership at the NHS Leadership Academy for three years and was asked to sit on the ‘Building a Digital Ready Workforce’ National Steering Group.  This led to me thinking about what we needed to do to help the boards of NHS organisations in particular to lead the transformation of Health and Care Services making the most of ‘digital’ – whatever that meant.

After much thinking I started to believe that it didn’t really matter what we did to develop boards; workshops, bootcamps, maturity matrices or conferences about AI and genomics. Until we changed how they saw their world and tasted different ways in which they might be able to lead in it, they were unlikely to make substantial changes in their strategy.  They might drop a few tens of millions on a new patient record system – but would that really transform? Would that allow new patterns of power and relationship to emerge? Or would it just take some kinks out of the current system?

For me it felt like doing ‘the wrong thing better’.

But what was the right thing?  The thing that might ‘develop’ the system? 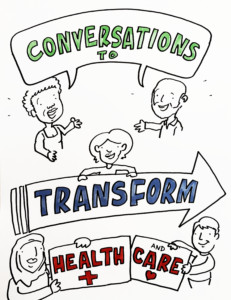 The thing that went against the habit of Board rooms, Board tables, agendas, PIDs, rag ratings and budgetary decisions?

Against hierarchical expressions of power delivered through plans and Gantt charts and (not so carefully) managed variances?

Well for those of us that have worked a lot in civic society, in community development, the place to look for some clues was clear.  Self organisation. Emergence. Transparency. Relationships, Inclusion, Diversity and Trust.

Work in the spirit of pioneers like Harrison Owen, Peter Vaill, John McKnight, Peter Block and others.  It was about leading with communities not over them or for them.

Connecting small groups of people with the passion, responsibility and power to make change happen locally and to invite the formal power structure to sit with them and listen. To be influenced and to influence. but mainly to encourage and support.  To ‘unleash’ the power of these small groups that care to do their work.

Open Space Events were planned for York, Hull and Scarborough to see if we could find the people who might really have the passion and the responsibility to transform health and care and whether we could help them to find their power….

Just follow the links to see a short film about what we did in each location and to explore what the people that can wanted to talk about.

What is Open Space?