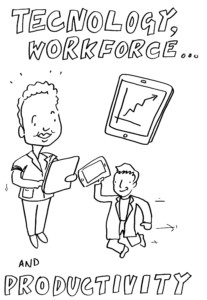 Technology Productivity Workforce in health and care was a conversation proposed by Dorothy Montgomerie who had a particular interest in how technology impacts the workforce in the context of an ageing population.

This conversation drew the largest number of attendees in the first instance and soon developed smaller eddies around the central emerging theme, which was about drug management, and the ways that people work with, and sometimes confound, the technology.

One of the attendees introduced the newest version of the Medi-Clear medication management system, which the manufacturers are aim to connect up to an app via an RFID tag, to make it part of the Internet of Things. The conversation went into some of the challenges – medication stashers, carers feeling like naggers, the push towards independent living, the way we can all become immune to alarms once we get used to them, and the gloriously detailed data from the Bar Code Medication Administration – which nobody then does anything with. It was acknowledged that sometimes, knowing that a seal has been broken and some medicine has been removed from the pack is not enough, you don’t know if has been taken or not, so there is always another step that has to be taken, by someone skilled and authorised to do so. But the first critical information piece of information – the seal has not been broken, so the medicine definitely hasn’t been taken – provides an alert. 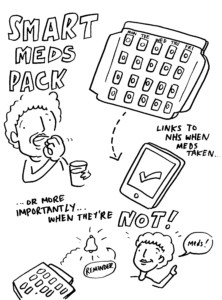 This led to the issue of, for example, recalibrating Warfarin dosages, and ensuring that carers providing domiciliary care, often out in rural settings, were able not only to get the necessary information about dosage changes, but also the right sized doses themselves. It was suggested that Amazon (or another delivery service) could get these out to where they were needed more quickly and efficiently than carers (who have other things to do!). This would then raise the issue of who is responsible when something goes wrong, at what point someone senior signs it off, and who pays for it (and how).

There was a very strong sense in this conversation that there were easier, cheaper ways of doing this (managing care in people’s homes) that we could learn from private sector businesses, that this was the kind of thing that NHSX and NHSDigital should be doing – but that it would all fall down if we don’t have the internet connectivity.

One thought on “Technology, Productivity and Workforce in health and care”