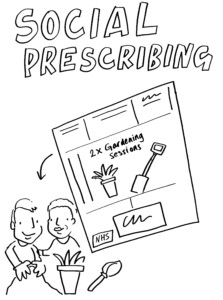 Social Prescribing (and how to meet people’s needs by connecting to community groups and activities) was a conversation proposed by Jade Whitelock and Joanna Smith of Modality.

Nobody turned up for the first part of this conversation, thus proving another of the laws of Open Space (whoever turns up is the right people!) so the proposer and notetaker had a chat about Social Prescribing in general, and then this conversation merged with another conversation, the one about what we do if Connectivity isn’t there.

Social Prescribing is a new approach for the GPs, which arose from ConnectWell commissioned by the CCG in partnership with Citizens Advice. It was designed to address social needs, loneliness, isolation, sometimes arising from medical needs, mental health needs, poverty. Activities such as gardening, going outdoors, crafts, and art therapy are known to support people’s overall health and wellbeing – what else is going on?

The conversation moved on to a little incident that had happened on Facebook the day before, where an elderly man had asked the group One Hull of a City what he could do to overcome his isolation and lonelinesss, on 2 or 3 days of the week. There were 67 replies, signposting him to Men in Sheds, All For One choir, arts and crafts and social activities all over the city. So what if there is already a fantastic network of social capital, social prescribing, working organically through social media? The man in question said it had been hard to reach out as he did, but he did it. What about those who don’t manage to do that, and what about those elderly people who do not want to learn how to use computers and smartphones, or learn how to use social media? For some, computers are causing isolation and loneliness, and there is a digital generation gap.